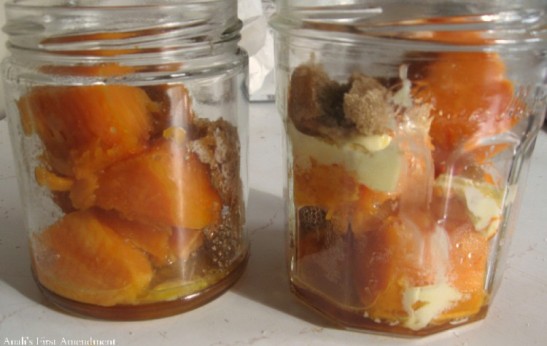 The Kwanzaa Principle Kuumba (koo-OOM-bah) means Creativity. Celebration on December 31st seems quite fitting, because New Year’s Eve is when we think about what we did the past 365 days. Or 366 days, with 2012 being a Leap Year. On that day, which teeters between the old and new, we can dream about what we want to create for the New Year.

Thinking about what makes us happy and healthy and trying to create that in our lives is one of the best things that we can do for ourselves. The happier we are, the better people we can be for those around us and for the greater community at large.

While thinking about the recipe for this post, I let some ideas marinate for a while. A long while. I didn’t know what I was going to do until the night before I wrote this. Then I had an epiphany. Which is often how creativity strikes.

Recently I’ve been trying to eat more sweet potatoes. They’re one of the good carbs and nutrient filled. Plus they taste great. I’ve been roasting them mostly, but wanted to try something a bit different.

When I buy products, the decision is sometimes based on the glass container, which I can reuse later. So I always have a stash of small jars. I’ve also been noticing that a food trend is making just about every food in jars. Ta da! Candied sweet potatoes in jars!

I love candied sweet potatoes, but never make them for myself. I tend to only have them on holidays when my mom or one of my aunts cooks them. This recipe is a way to have them every once in a while. Also, I’ve been trying to find different breakfast foods. While candied sweet potatoes aren’t traditionally a breakfast food, I mixed in some vanilla rice milk and it was just as tasty as my beloved oatmeal.

I’ll be making this again, but it was a bit too sweet, so I’ve decreased the amount of sugar and syrup. You may want to adjust the sweetness to your liking. Also, I realized that I forgot to add the cinnamon and ginger when I made mine, so I’ve added it to the recipe, although it was still good without them. You may also want to use vanilla instead of rum if you’re eating this for a weekday breakfast. Or not.

Wash sweet potato and remove any hanging roots. Use a fork to poke holes all over potato. Place on a small plate and put in microwave for about five minutes or until soft.

Use potholder, oven mitt, or tea towel to remove plate from microwave. Careful it might be hot! Cut potato in half.

Place in freezer for about five minutes to cool it down. Remove from the freezer and peel off the skin. You might need to use a knife, but it should come off pretty easily.

Cut the potato into chunks and divide between the two jars. Divide all the ingredients in half and place half in each jar.

Place uncovered jars in microwave for about two minutes or until the liquid starts bubbling at the bottom. Remove from microwave and set out for a minute or two. Put the covers on the jars and shake them, so the liquid coats the potato chunks.

Eat like this or as I did, add vanilla rice milk until it almost covers the potato, then stir with a spoon until creamy. It looks like baby food, but it tastes awesome!

Enjoy! I think that George Washington Carver would be proud! Although I don’t know how he’d feel about the rum…

…
ABOUT
Lisa Johnson created her blog, Analis’ First Amendment in 2006, and provides tasty servings of life, food, and current events. She favors sweet over savory, so you’ll see lots of baking on her blog. She’s a freelance writer, attorney, and teaches others how to find their “inner baker.” Lisa lives just outside Boston, in Quincy, Massachusetts. Follow her on Facebook and Twitter @AnaliFirst and Pintrest.