Cooking Up a Heritage Connection: Me, Grandma and a Pot of Beans

Kuumba is one of my favorite Kwanzaa principles, because all of us have creative potential at our disposal to positively affect our situation and that of those we encounter, regardless of our age, financial situation or educational status. Creativity is our birthright, and anyone can choose to tap into it: be it by penning an essay or performing a song; developing a new technology or idea for social change and community building; designing or crafting a beautifully designed garment, or useful tool. The possibilities for what one can do and create with one’s talents are endless, which is good to consider as the year draws to a close and the new one approaches.

As we look for ways to create a better life for ourselves and those connected to us, it is inevitable that we must look back on and voice our appreciation for the work of those who came before and provided a foundation for us to build on, and a path from which to form an path of departure. Creativity does not take place or unfold in a vacuum: each expression of it can build on what has has been done before, and cooking is no exception. My cooking is as much about a love of food and eating well as it is a way for me to connect to, celebrate, be enriched by, and preserve my heritage.

I spent most of my summers growing up visiting with extended family in Charleston, SC. It was a foundational experience in more ways than one and set the stage for how I cook and eat today. It is a longstanding low country tradition in many African American families to send young children to spend time with their grandparents for extended periods, as a way of transmitting and maintaining cultural ties. In my case, the chord that struck deep within is a thread that runs straight to the heart of Gullah inflected cooking: bitter greens, legumes, tubers, and roots slow simmered and served with rice or grits all year round; fresh caught fish, shrimp, and crab ubiquitous and plentiful during the summer months.

When a good friend pointed out that my cooking more or less revolves around pork and beans, my initial reaction was to feel surprise–not only at how right she was–but at the realization, once again, that the foods of my childhood have made a deep and lasting impression on my palate and continue to guide my hands, heart, and head in so subtle a way that even I can’t always taste how Southern my food is. Black eyed peas slow simmered with smoked neck bones… green beans cooked with bits of chopped ham and lima beans stewed with ham hocks in thick walled pots–all made regular appearances on my Grandmother’s table. While I didn’t see it this way it at the time, these dishes taught me that in cooking, as in life, a little bit can go a long way.

Each season, I try my hand at a dishes from my childhood that is dear to me, to reconnect with old memories while renewing my understanding of what inspired them in the first place. Collards, skillet fried chicken, oxtails and okra stew have all made appearances on my table this year in endless iterations. This Fall was all about my grandmother’s lima bean and ham hock stew, which I didn’t quite know how to appreciate as a youngster. I tended to look at it as an overly plain and austere dish, but my recent experiments with it have proven that it is anything but. A handful of onions, a clutch of aromatic herbs, and small cut of smoked meat (or ground nut meal if you are vegan or vegetarian), are all that it takes to cook up a big pot of deliciousness that is bursting with flavor.

The lima bean experiment started innocently enough–when I was setting up my garden last spring, I met a plant dealer selling beautiful organically raised starts. As I began to peruse her offerings, my eyes went immediately to the pole and bush beans. I chose two types of limas, Christmas and Jackson Wonder. The first are descended from stock originally cultivated in antebellum Mississippi, the latter were developed on a farm outside of Atlanta, my home during the school year. I was filled with excitement over the prospect of growing and cooking with plants that could (literally) trace their roots to the South, foods that were likely raised and eaten by people related to me. I put them in the ground and began looking for recipes to help jog my memory. It had been nearly 15 years since I had eaten limas, which I knew required a skilled and attentive touch in order to summon forth their full richness of flavor.

Hungry to connect more deeply to my heritage, I began searching for historical recipes penned by African American cooks: I wanted my beans to come not just from me and my grandmother, but from the larger community of ancestors. I found a simple and straightforward example by Richard Estes, who began cooking on trains and eventually became private chef to U.S. Steel’s top executives, as well as to celebrities from abroad. His cookbook, Good Things to Eat, was among the first penned by an African American, and has great examples of what traditional Southern food looks like as haute cuisine. The Lost Art of Scratch Cooking by Natha Adkins Parker proved to be very inspirational as well, as it confirmed what I already knew: that good cooking was as much about intuition and feeling as it is about strict adherence to a recipe.

While some recipe blogs and cookbooks call for dried or frozen beans, fresh is always best. I began by cooking my grandmothers recipe with fresh limas from the market and a heritage breed ham hock, and the results were fantastic–way tastier than I remembered–each bite of bean tasted like rich, smoky pork. When the limas in my garden were ready, I gathered them, saved a few to dry and plant next season, and used the rest along with the last of Summer’s tomatoes and corn to make a succotash–there were no leftovers!

Once fresh limas were no longer available, I switched over to Rancho Gordo heirloom beans, which are easy to find at markets that stock organic and artisanal products. Otherwise, I order from Anson Mills, a supplier that sources grain products grown from heritage breed seed primarily from growers in Georgia and South Carolina. When using dried beans, it is helpful to check the packing or use by date on the bag–older beans will take a longer time to cook. In each case, I discovered that slow food is indeed the best–lima beans take about 90 days to reach maturity and benefit from slow, gentle simmering or baking–in some cases, I slow roasted mine overnight at 200 degrees.

With each rendition, I began to add my own twist to the recipes. My favorite one right now is Christmas limas with a ham hock and braised Broccoli Raab–a play on black eyed pea and collard stews or Tuscan white bean and kale stews. It is rich savory, packed with vitamins and minerals, delicious with rice or as a simple stew. To make this version, follow the recipe below, and a few minutes before you plan to serve the beans, saute the greens in a pan with onions and oil until slightly tender. Add a few florets to your dish, ladle the beans and broth on top, and serve. 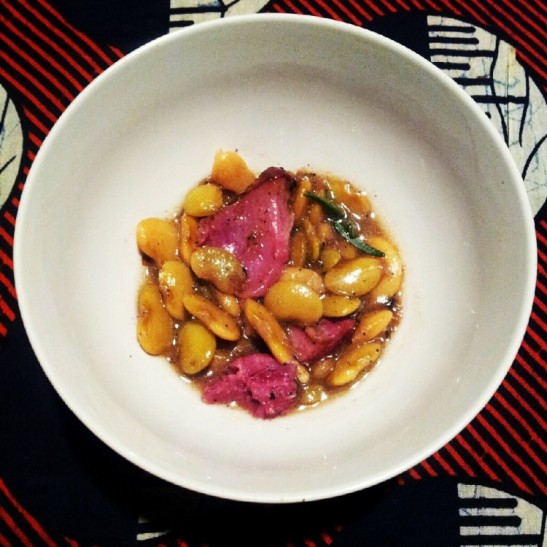 Directions
In a heavy walled pot or Dutch oven, cook the ham hock until browned. Sauté onion in the hot drippings over medium-high heat 8 minutes or until translucent, if necessary add a few teaspoons of olive or peanut oil. Add thyme and sauté for about 2 minutes, until tender. Add the limas and bring to a boil. Reduce heat to low and simmer 1-1/2 hours, uncovered. (if cooking with dried limas, slow cook for a minimum of 2 hours and as many as 4 for the best result). To serve, ladle beans into a bowl with a little broth from the pot, and add any desired condiments. My grandmother served hers over rice with hot pickled vinegar sauce, I like mine with minced peppers on top as well. To make a vegan version of this dish, substitute 1 cup of ground nut meal for the meat to add texture and heft to the pot.

…
ABOUT
Shannon Mustipher’s love for food and sharing it with others began in a family of skilled home cooks with agrarian roots. After studying Painting at RISD, Ms. Mustipher worked as a styling assistant on fashion and lifestyle shoots for clients including Elle, Nieman Marcus, Gourmet, and GQ. An apprenticeship with an urban farm inspired Shannon to get involved in the movement to improve our food system and the way we eat.

Ms. Mustipher currently lives in Bedford Stuyvesant, Brooklyn, where she is at work on her first cookbook and the Creative Director of SUPERETTE, a food and beverage concept atelier whose clients include Art in the Age Spirits, Do or Dine, and Kinfolk Magazine.

One comment on “Cooking Up a Heritage Connection: Me, Grandma and a Pot of Beans”